From Shrine to a Fuller History: The Vance Birthplace 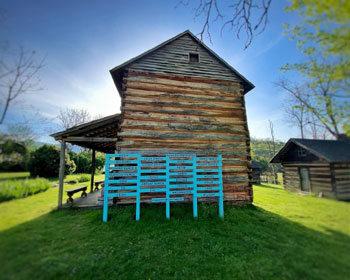 From a historical perspective, Zebulon Vance has a mixed record. Twice elected governor of North Carolina, during his life the Reems Creek, N.C.-born Confederate military officer and politician was considered forward-looking, even progressive. In the 21st century, acknowledgment of the slaveholder's racist views led to the dismantling of a downtown Asheville obelisk erected in his honor.

A nuanced view of his contributions to the state -- one that doesn't shy away from the problematic side of his legacy -- is part of the goal of the Vance Birthplace, a North Carolina historic site in Weaverville. And the Mountain History and Culture Group launched in 2017 aims to support the work of the site and its site manager, Kimberly Floyd.

"The Vance Birthplace is historically and culturally significant due to the breadth and reach of the narratives that unfolded on this land that still impact us today," says Floyd, who mentions the institution of slavery, Reconstruction and the Jim Crow Era as significant components of that narrative. She emphasizes that a mix of people and cultural traditions -- people of African ancestry, Europeans and Cherokees -- helped shape the region. Today the historic site provides a means to explore the complex history of the plantation and the region.

An existing group, Friends of the Vance Birthplace began in 2000 but officially disbanded in January 2022. That group found fundraising impossible "because they had 'Vance' in their name," says Steven Nash, a professor of history at East Tennessee State University and president of Mountain History and Culture Group. "A second support group was necessary," he says. Formed in 2017, the seven-member MHCG board raises funds, helps with events and "all the things a support board does," Nash says.

The Vance family enslaved more than two dozen persons. "The men and women of color associated with the Vance family experienced all the social, economic, and political impacts of slavery," Nash says. He says that the MHGC board "believe that the current staff's commitment to an inclusive interpretation allows the site to continue to serve as a place of dialogue and exchange of ideas within the community."

Around the time of the 2008 recession, the Vance Birthplace was in danger of closing. "It had the lowest annual visitation of any state historic site," Nash says. And more recently, the pandemic provided even more incentive for the staff to rethink its approach; Floyd and her staff pivoted to online and digital programming. "And they did that in a way that allowed the site -- and the MHGC -- to emerge from the pandemic stronger than ever," Nash says.

Nash concedes that the most significant challenge facing his organization is public perception. "A lot of people in the community view the site with suspicion," he says. "As a board, we are sympathetic to that fact." While the Vance Birthplace site was established as a "shrine" to glorify Vance, today Nash's group supports the site staff's work to present a view that takes in "the site's full history."