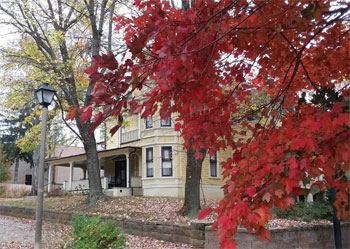 "Few buildings are vast enough to hold the sound of time," wrote Thomas Wolfe in his novel You Can't Go Home Again, published posthumously in 1940. Wolfe's actual home is one of literature's most famous landmarks. The author set many of his autobiographical fictional works in his home on North Market Street in downtown Asheville. The Thomas Wolfe Memorial (also known as "the Old Kentucky Home") has been open to visitors since 1949, and was designated as a National Historic Landmark in 1971. An arsonist set fire to the structure in 1998, but after a major restoration initiative, the house opened again in 2004.

The Thomas Wolfe Memorial Advisory Committee was incorporated in 1987 as an independent and nonprofit support organization for the historical site. The advisory committee's efforts are exclusively charitable and educational, says Anastasia Clare, board member since 2017 and president since 2020.

The nine-person committee was organized to promote interest in literature, "particularly, but not limited to, literature and writings authored by Thomas Wolfe," Clare says. She notes that because Wolfe's home in Asheville figures so prominently in the author's novels, visitors "walk within the pages of a story."

Like many other historic sites in North Carolina and beyond, the Thomas Wolfe Memorial was forced to restrict in-person activities during the height of the pandemic. That decrease in activity and lower profile impacted the work of the advisory committee as well. "It limited some of the organic interest that often blossoms into a new 'friend,' volunteer or board member," Clare says.

The membership arm of the advisory committee is the Friends of Thomas Wolfe. The group, Clare notes, totals around 50 members (including the committee) at this time. "We develop programs, partnerships and activities to keep Wolfe's works alive and attract visitors to the site," she says.

During the pandemic, some of the committee's activities were placed on hold, including an annual summer multi-day teacher training program. "But with the help of our partner organizations, we pivoted some events online," Clare says. The annual Student Writing Contest for 2022 recently concluded; students in grades 4-12 were invited to write their own stories inspired by Wolfe's 1941 short story, "The Return of the Prodigal: The Thing Imagined."

With shutdowns now a thing of the past, the committee has more initiatives planned for the future. "In the new year, we'll partner with the Wilma Dykeman Legacy to host our annual Thomas Wolfe short story book club series," Clare says. "And since the sessions have moved to Zoom, they're an opportunity to connect with readers from around the world."

Tom Muir is the Thomas Wolfe Memorial historic site manager; he has held that role for nine years. He's also a non-voting member of the advisory committee and works closely with that group. "In addition to generating funding, [the committee] works with me about programming and as a conduit for connecting the site with community resources," he says.

Clare encourages anyone interested in the Thomas Wolfe Memorial to join the Friends of Thomas Wolfe. "Whether you're a lover of literature, an aspiring historian, or someone who firmly believes in the power of place and community, we'd love for you to get involved," she says.