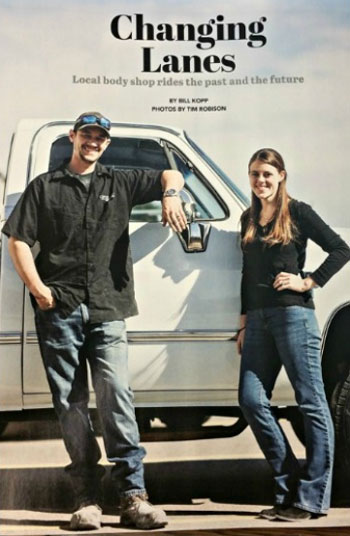 Most people only visit a vehicle paint and body repair shop when their vehicle has suffered damage. But while TD Customs in Mills River, N.C. expertly provides collision repair services, they do a whole lot more. Tim Donaghue owns and operates the business with wife Tara, and custom/repair work is something of a family tradition. "My dad has a body shop in in New York," Tim explains. "He does classic restoration. He's had that shop for 30 years, so I grew up doing this kind of work."

TD Customs has completed many automobile restorations; notable projects include classic cars of the 1960s, racing cars, and trucks. The local owner of a 1956 Buick recently restored his car to showroom condition; it features a snappier-than-original paint job thanks to TD Customs. "We see a lot of '66 and '67 Mustangs in the shop, too" Tara says. And they just finished restoration on a 1962 Impala.

Another project currently underway has personal resonance for the Donaghues. Leading me toward the back of the shop, he gestures toward a large vehicle. "That's a '39 Chrysler; it was my grandmother's first car, the one she learned to drive in," Tim says with pride. "She bought it when she was 15. She drove it for a few years, then her and my grandfather got married. They just parked it; it's been in storage for 62 years!"

When time permits between projects for customers, the Donaghues are working on a full restoration of the "family car." "We're just going to fix it up and put it just like it was," Tim says, "and park it back my grandmother's driveway."

Though classic restorations are the bulk of TD Customs' work, the Donaghues provide some very futuristic enhancements to select vehicles. The trademarked Lumilor process is a luminescent paint process that allows a vehicle to literally glow in the dark. Lumilor is a very new process, developed less than four years ago. "It's only been available in the U.S. For about two years," says Tim.

Tim and Tara went to Las Vegas last October for intensive Lumilor training. TD Customs is one of only ten shops in the country licensed and qualified to offer Lumilor. "And we're the only one in the Carolinas," adds Tara.

The Lumilor treatment isn't only attention-grabbing; it's something of a safety feature, especially for motorcycles. "I've pulled over and asked cops, 'What do you think of this?'" says Tim. They're surprised when they learn it's a painted application rather than lights; the latter could potentially be illegal. " And I've been told by every officer that I've asked, as long as you don't have it flashing going down the road, it's okay."

The exacting process involves multiple coats of paint, with tiny electrical wires embedded deep into the coating. The entire system is connected to the vehicle's battery, allowing the driver to switch the system on and off at will. Lumilor is available in a variety of colors. "There's a ton of different possibilities as far as design and what you can do," says Tara.

The couple's Lumilor-coated Kawasaki is often on display at TD Customs. "It has a cool paint job during the day," Tim smiles. "I chose the lace pattern on the bike, because it matches my El Camino. But when people see the Kawasaki lit up at night, it has a killer paint job!" He admits that because the process is so new and unusual, some people don't know what to think. "They're trying to wrap their mind around it, because there isn't anything like it."

Tim and Tara took their glow-in-the-dark bike to Myrtle Beach Bike Week last fall. "We were parked between two $80,000 'baggers,'" Tim recalls with a laugh, "and everybody was looking at our $3,500 Kawasaki!"

The Donaghues have channeled their passions into their work. Thanks to those insurance repair jobs, custom classic restorations and Lumilor projects, every day is different than the last at TD Customs. They've even painted unusual items for customers, including refrigerators and an electric guitar. "Those are more creative than just replacing a bumper, Tara says. "I'll pretty much paint anything," adds Tim. "I always joke around with the customers and say, 'I'll paint your tennis shoes if you leave a deposit!'"

Back to Business Main Menu