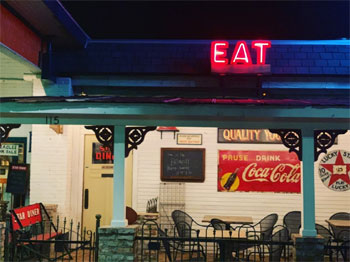 At first glance, a disused concrete building in a tiny town subject to river floods might not seem the ideal location for a fine dining restaurant. But Chef Brian Sonoskus saw the potential in both the town -- Marshall, N.C. -- and the building, a former gas station. He opened Star Diner in February 2017; the small eatery has quickly established itself as one of the hottest restaurants in the region.

Two decades ago, you would have been hard pressed to any restaurant in downtown Marshall. Bypassed by highway development, the downtown -- a short strip along the northern banks of the French Broad River -- mostly kept to itself.

Marshall began a creative renaissance in the 21st century when local residents led by potter and activist Rob Pulleyn successfully lobbied to save the historic Marshall High School building. Constructed on Blannahassett Island -- a 1000-foot long eyot in the middle of the French Broad River -- the property has since been renovated and placed into use as exhibit and studio space for many of the region's creative artisans.

Meanwhile, 20 miles upriver in Asheville, Brian Sonoskus was a leading light in the region's restaurant business. For more than a decade the public face of Tupelo Honey, he oversaw the Asheville restaurant's expansion from a single location to a successful network of more than dozen eateries. When he decided to strike out on his own, he made a strategic decision to locate outside Asheville.

He was intrigued when he learned that local business owner Bud Nachtman was in the midst of renovating an old gas station in downtown Marshall. Sonoskus saw potential in Nachtman's vision. "For the last couple decades at least, people had been saying that Marshall would be the Next Big Thing around here," he says. The renovation aimed to give the building "a really nice, old-timey atmosphere filled with cool antiques," Sonoskus says, "making it a talking point of Marshall."

"And then he wanted to find someone who wanted to run a business out of it," Sonoskus says with a smile. "That was me."

Sonsokus' culinary background comes from his family. "I started out grandmother-taught," he says proudly. "My whole family are good home cooks." He was the first one to make food a profession, though. After starting out working in a New Jersey restaurant, he went on to culinary school at Johnson & Wales University. "I've been working in the business 35, 36 years now," Sonoskus says.

The intimate vibe of Star Diner comes through in the service, and the atmosphere reinforces that aesthetic. There's seating for 26 diners inside the cozy space, but no outdoor seating. "We have a train that goes right by the back of the building," Sonoskus explains with a chuckle. "We're not really looking to get plates covered with coal dust."

Sonoskus characterizes his culinary vision for Star Diner. "We do things in a little more of an old-school way," he says. "Comfort eclectic Euro-Americana: classic dishes, slightly reinterpreted to my taste." Signature dishes include beef tenderloin with classic bordelaise sauce and asparagus, and a lobster fettuccine dish. "And a lot of people say that our almond-crusted Carolina mountain trout is the dish you have to have when you come here," he says.

Star Diner sources ingredients locally when it makes sense. "I do what I can," Sonoskus says. "But I don't buy just because it's local; it's got to be the best product I can find." He raises his own egg-laying chickens, and visits local farmers' markets. The resulting yield influences the menu. "Currently, we're doing scallops with roasted carrots and kale and roasted shallots," he says. "It comes with a chimichurri and a scallop Beurre blanc; that's a nice one."

Sometimes Sonoskus starts with a basic idea, letting the food guide him toward a finished menu item. "We've got a pork belly in the brine right now," he says. "I'm not quite sure what we're doing with that yet, but it will involve Brussels sprouts." His love of food comes through in conversation. "We do a lot of different things; they're all my favorite dishes," he says.

"I like to create," says Brian Sonoskus. "I like to do comfort foods that are true to my past, my background and my heritage, and I like to be able to create things that are done perfectly." Like his food, his ultimate culinary goal is ambitious and straightforward: "It's going to be the best meal you have."