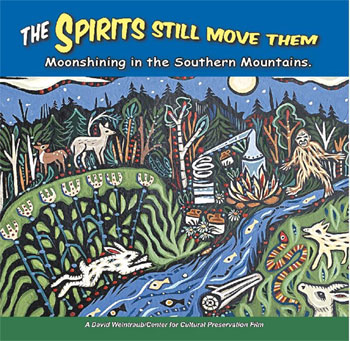 There's an enduring stereotype of moonshiners: they're lazy, ignorant backwoods folk bent on breaking the law. That caricature has been reinforced in popular culture in everything from the original design of the Mountain Dew soda can to more recent cable television series like Discovery Channel's Moonshiners. But as Western North Carolina filmmaker and historian David Weintraub emphasizes, "Everything you know about moonshine is wrong." And Weintraub sets about the task of correcting misconceptions -- and elucidating history -- in his latest documentary, The Spirits Still Move Them.

Some 15 years ago, Weintraub launched an oral history initiative called the Mountain Elder Wisdom Project. That endeavor dovetailed with his founding of the nonprofit Center for Cultural Preservation, where he's the organization's Executive Director. Weintraub has published more than a dozen books and produced more than 35 films; The Spirits Still Move Them is the latest installment in his lifelong mission to explore and share cultural legacies.

"I grew up in a fairly diverse background where there was a lot of respect for culture," Weintraub says. But he came of age in an era when popular TV shows like Petticoat Junction and The Beverly Hillbillies portrayed a fanciful version of rural Americans. "It was entertainment," he says, but some of those images reinforced less-than-flattering, inaccurate notions.

That was especially true in pop culture when it came to moonshiners, manufacturers of illicit/illegal alcoholic beverages. "The message for a lot of the country was that moonshiners were crazy, and they didn't like to work too hard," Weintraub says. "They got this rap of having long beards and longer arrest records, of being violent outlaws." There was an idea that moonshining was merely a way of avoiding real work, he says.

As Weintraub's latest film illustrates, the truth is very different. "What I learned from these oral histories is that moonshining was probably the toughest work you could do," he says. "There was science involved, and there was the constant battle with the elements and with law enforcement." Moonshining, he says, "was about survival more than anything else. It was about how to scratch out a living under difficult circumstances."

Weintraub's film avoids a narration approach, instead giving the real-life characters the opportunity to speak for themselves. The present-day moonshiners in The Spirits Still Move Them -- some operating legally with state-of-the-art distilleries, others still preferring a DIY/illicit approach -- aren't caricatures; they're hard-working people, many of whom could have chosen an easier and more comfortable life path.

And that's a recurring theme in Weintraub's film. Through archival photographs and oral histories, The Spirits Still Moves Them places moonshining in a larger historical context. The practice wasn't even illegal until after the Civil War, and it was pushed further underground during prohibition. The film makes the point that there was effectively a class system in place. Many decades ago, wealthier people in the region could settle on land ideal for farming. Poorer folk were forced into hillsides and hollers where farming was difficult. So if converting a portion of their corn crop into liquor provided badly-needed income, that's what they would often do. The legality of the practice often didn't figure into their thinking; it was a matter of survival.

Weintraub emphasizes that historically, the federal taxes on liquor were onerous. "You can ask the question: Were people breaking the law, or was the law trying to break them? The federal excise tax on moonshine was focusing on poor people who lad the least means."

The present-day moonshiners who appear in the film live in and around the region: Western North Carolina, upstate South Carolina and East Tennessee. And their onscreen candor suggests they're not too concerned about the law coming after them. "I was more concerned about that than they were," Weintraub says with a chuckle. Initially he thought his film would have to blur faces and distort voices to protect the moonshiners' identities. But he says he was often told, "I want to be on-screen; I want to be able to show this to my kids and my grandkids." The moonshiners believe they're carrying on the heritage and traditions of their culture, and by appearing in Weintraub's film, they hope to correct what they view as unfair, distorted portrayals of their pursuits.

Weintraub began the moonshine film project in 2014. "Then I stopped for awhile," he says, explaining that multiple other projects got in the way of his returning. But along the way, he enriched his understanding of Appalachian culture, and that experience set him on a path of making an even better film. He eventually returned to the project, adding about 25 additional hours of film to the 15 or so he had already shot.

The final edited film runs about an hour ("People have no attention span any more," Weintraub says, half-kidding) but the filmmaker is in the process of creating a dozen or more shorter films YouTube that explore the subject in deeper ways. One of those builds on the film's focus on the role that people of color played -- and continue to play -- in the moonshining tradition.

The world premiere of The Spirits Still Move Them is taking careful advantage of relaxed COVID-related rules governing public gatherings. In addition to a livestream event, the film will be the centerpiece of at least three public events -- at The Orange Peel, Southern Appalachian Brewery and North River Farms -- each featuring live music and a question-and-answer session with Weintraub and some of the moonshiners who appear in the film.

Asked if his extensive research involved partaking of 'shine, Weintraub laughs. "Documentary filmmaking requires a lot of research,"he says. Emphasizing that he's not a big drinker, Weintraub allows that he was fortunate to try some amazing blackberry moonshine. "It was so smooth and tasty, it didn't even [seem] like there was alcohol in it," he says, "until you stood up."

Weintraub points out that the moonshine didn't kill or blind him. "It didn't make me any worse for wear," he says. "And it certainly helped me better understand the whole process." For more information, visit saveculture.org.