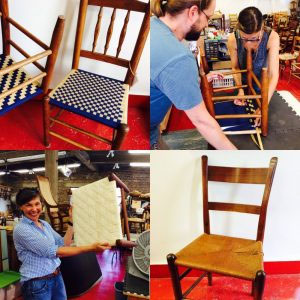 When most people see a lovely and comfortable caned chair, it might not occur to them that it is part of a long -- ancient, even -- and proud history. And while caning can have a folk-art quality, in truth chair caning is a prestigious, high-end functional art form. Dedicated to both the practical application of chair caning and this historical preservation of its traditions, the Silver River Center for Chair Caning was established in 2007.

The Center's co-owners are Brandy Clements and Dave Klingler. Happily describing themselves as "chair nerds," they are deeply committed to preserving the ancient art. While there are a few -- but not many -- chair caning schools -- in the world, Silver River Center for Chair Caning is unique in its status as the only combination school and museum in North America.

The museum space features a combination of permanent collection items and rotating exhibits. The permanent collection outlines 86 styles of caning, Klingler says. "And that's not all-inclusive, not by any means." He considers the display a jumping-off point to encourage further exploration. "Here we are, ten years in," he notes. "And we still see styles come in that we've never seen before."

A walk around the Center -- most notably its Museum section, which is free and open to visitors -- reveals one of the most fascinating qualities of chair caning. In the same way that geography and climate affect a region's farming and diet, so too do they exert great influence on its furniture. And because chair caning developed among the indigenous peoples of cultures across the globe, caning materials differ widely. "Styles become regional," Klingler says.

Brandy Clements cites an example that illustrates the point. "A lace cane chair came in from South Africa, and the cane was made with cowhide." Most places in the world, rattan is the traditional material for lace cane. But in South Africa, rattan shipments from Indonesia ceased in the 1700s. So artisans improvised, using materials at hand.

Chairs that are part of the rotating exhibit are often on loan from members of The SeatWeavers Guild. And though chair caning is an ancient tradition, the Guild is very new; established in 2007, it's "fully dedicated to seat weaving," says Klingler. "Much like we are." Silver River Chairs hosted the Guild's 2016 annual gathering at Western North Carolina's Folk Art Center. "Ninety chair caners came from as far away as New Mexico to share skills, knowledge and camaraderie," says Clements.

Silver River Chairs is designated as an Official Education Center of the Southern Highland Craft Guild, and hosts a surprisingly wide variety of hands-on instruction. In its well-appointed space -- the entire second story of a former warehouse in the heart of Asheville's trendy River Arts District -- Silver River Chairs offers training in hand-woven and machine caning, and weaving methods including Rush, Splint and Shaker tape.

Popular workshops are scheduled about once a month, and an intensive ten-day "boot camp" is offered periodically. While mastering the art of chair caning is demanding and physically challenging -- "it can't be done in an hour, as HGTV might lead you to believe," cautions Clements with a wry chuckle -- it's also very rewarding.

The Center does do the occasional restoration, but Clements and Klingler channel their energies primarily into the school and museum. "Our goal is to elevate the craft and inspire a reverence for a worldwide chair caning legacy," Clements says. She points out that cane chairs are on prominent display in prestigious halls like London's Victoria & Albert Museum.

There is an Appalachian dimension to the worldwide art of chair caning, one that is proudly showcased in some of the Center's permanent collection museum pieces. "We pay homage to that tradition with chairs caned using corn shucks and hickory bark," Clements says.

Speaking of tradition, Brandy Clements comes from a proud line of several generations of chair caners. "It was a family craft," she says. For her, "it has become an unexpected odyssey and a passion, one shared by a surprising number of chair connoisseurs throughout the world." And her vision for the future of Silver River Chairs is even more ambitious: "We could fill 10,000 square feet with the exhibit ideas in my head," she says, positively beaming at the idea.

Though chair caning is sometimes described as a dying art, Clements and Klingler are doing their part to make sure it remains very much alive. Through their active participation in social media, the pair have discovered -- and developed and maintained regular communication with -- chair caners as far away as Egypt, Argentina, Uruguay, Brazil and Australia, as well as throughout the European continent. "We're here to produce a new generation of chair caners. This is indeed a worldwide craft," Clements asserts. "And I am indeed a shameless chair nerd."

Back to Creative Arts Main Menu