The Irresistible Attraction of Local Talent: The Magnetic Theatre 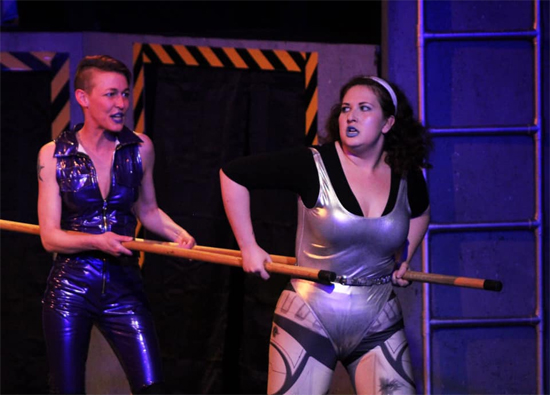 A creative nexus in Asheville's revitalized River Arts District, the Magnetic Theatre was launched in 2009. Founded by a team that included local poet and playwright John Crutchfield, Lucia Del Vecchio, Jonathan Frappier, Chall Gray and Steven Samuels, the theatre was designed from its start to draw upon local talent.

Artistic Director Katie Jones says that the theatre's vision is to provide "a space for theatre artists to create original work in a professional setting." When selecting performances, Jones says that the nonprofit theatre's board asks two main questions: "Has it been done in Asheville and/or Western North Carolina before? And does it present a unique perspective, style or content?" From its start, the Magnetic Theatre focused on staging performances that fit its motto: "New plays, locally grown."

In its earliest days, the theatre was housed in a succession of locations, but by 2015 the Magnetic Theatre settled into its permanent home at 375 Depot Street. Asked to name the venue's most unusual performance to date, Jones initially demurs. "Much of our work could fit into that category," she says. But she mentions Jim Julien's "The Caro Savanti Experience," a satire poking fun at local foodie culture.

A perennial favorite at the Magnetic Theatre is "The Annual Bernstein Family Christmas Spectacular," an extravaganza that changes from year to year. The raucous musical comedy is written by a team of playwrights, and the audience is drawn into the action onstage.

Both of those shows -- and most of the Magnetic's other offerings, including stand-up comedy showcases -- will appeal primarily to locals who will pick up on the inside jokes and references to the Asheville cultural scene. "We get some visitors," Jones says, "But our audience is primarily local." Yet the caliber of work presented belies its small-city origins. Jones recalls a Chicago couple who attended a recent show. "They're regular theatregoers, and they were floored that this kind of work exists in a tiny town like Asheville."

Jones says that the Magnetic "endeavors at all times to be a community space. We have open auditions every year and highly encourage submissions from new playwrights." Emphasizing that the theatre explores themes and content that matter to the people who live here, she says, "you may love it or hate it, but you can't say that Magnetic is just 'playing the hits.'"