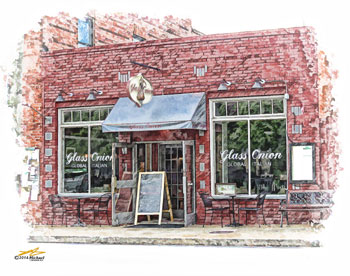 Chefs Eddie Hannibal and Natalie Byrnes both grew up in the Eastern Long Island, N.Y. The rural farming and fishing communities are in close proximity to the Hamptons, a hub of fine dining. "It's quite the resort area, so there were always lots of restaurant jobs," Hannibal says. Though they hadn't yet met, both of them were -- in Eddie's words -- "sucked into the industry early," and clearly loved the work. He went on to a kitchen apprenticeship in Miami, while Natalie studied at Johnson & Wales University in nearby Providence, R.I. "We both ended up back in Long Island, working for the same people in two separate restaurants when we met," Hannibal says. "And the rest is history."

A key moment in the couple's shared history would be when they made the decision to move. "I was 50," Hannibal says. "And I didn't want to move when I was 60." So they looked at options around the country, and were intrigued by Western North Carolina. "We happened upon Weaverville; it has the appeal of the small-town America that we grew up in," he says. "Everybody's friendly and very welcoming; you know everybody on the street."

Even though downtown Weaverville is less than ten miles away from much-larger Asheville, it can feel like a different world. "In Weaverville proper, there are no real franchise stores; we really like the vibe of it," Hannibal says. And ultimately, that vibe drove the couple's relocation decision. "It was more [about] where we wanted to live than where we wanted to do business."

In truth, they were just as enthused about opening a restaurant in Weaverville. Glass Onion -- named after the Beatles song on the 1968 "White Album" -- opened in 2012. The restaurant has seating for 65 patrons, plus bar seating. And like the other restaurateurs profiled for this story, Eddie and Natalie have a no-nonsense approach to food. "We call it global Italian," Hannibal says. "The trick to Italian cooking is that it's very simple and features clean ingredients."

Glass Onion's approach favors fairly simple presentation that highlights the ingredients. "Not a lot of ingredients," Hannibal emphasizes. "Just a lot of flavor." Hannibal knows what his diners want. "And I try to serve what people would expect to eat," he says. That means a menu featuring many traditional favorites. Starters include items one would expect to find in a traditional Italian eatery: Caesar salad, grilled eggplant with mozzarella and basil pesto, and a Bosc pear and slow-roasted beet salad, to name a few.

But the creative culinary spirit cultivated by Hannibal and Byrnes means that diners will find a clever spin on tradition as well. "I make a fried calamari with a graham cracker crust," Hannibal says. "It's very different ... and very, very popular."

Main courses at Glass Onion include savory presentations of chicken, ribeye, pork loin chop and local Sunburst trout. "And people come far and wide for our scallops," Hannibal says. But perhaps most interesting is Hannibal's grilled Scottish salmon featuring celery root pureé and creamed leeks. Like most of the restaurant's menu selections (pasta notwithstanding, of course), it's gluten free.

Hannibal's kitchen is very accommodating when it comes to vegan requests, too. "I can make my risottos without animal product in them," he says. "That's never a problem. We offer vegan, vegetarian and gluten-free options throughout our menu."

No Italian restaurant would be complete without pasta on the menu. Glass Onion keeps a half dozen pasta choices on its board, with fresh, handmade pasta as an option. All include as many fresh ingredients as possible -- the vegetables, ricotta cheese, greens and so on. Hannibal's most intriguing pasta dish, though, features game. "We make a really nice wild boar bolognese," Hannibal says. He's also quite proud of his dessert offerings. "I make the best coconut cake and triple chocolate cake you'll ever have."

In the end, it's all about uncluttered quality, and satisfying diners. "You find what people want to buy and you sell that to them," Hannibal says. And both he and Natalie take great pride in fulfilling diners' expectations. "It takes a lot of mental energy and physical execution to make a dish," Eddie admits. "So to have it come out the way you envisioned it is very rewarding."

Eddie Hannibal's direct and plain-spoken manner is reflected in the clean, orderly and straightforward environs of Glass Onion, a place in which simple, flavorful food is front and center. "It's what a restaurant should be," he says.