The Gamekeeper: Beyond the ordinary 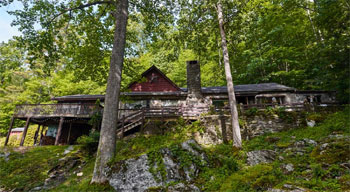 The Gamekeeper represents destination dining in two ways. The restaurant's menu deftly balances adventurousness with a direct, no-nonsense approach: "Get the best and the freshest, do the minimal to it, and get it to the diner," says Chef/co-owner Ken Gordon. And getting there -- at least some of the time -- can be a challenge. Situated on a mountainside some seven miles southwest of Boone, the Gamekeeper can be inaccessible when winter weather strikes. "Every other weekend in the winter, we're wondering how much snow are we going to get, when's it going to come, how's it going to come," says Gordon with a good-natured chuckle. "And it's a challenge. But it's okay; that's part of what makes it fun."

Gordon and his wife Wendy R. Sykes-Gordon (also a chef) opened the Gamekeeper right before Thanksgiving in 2000. Prior to their purchase, the restaurant had been run by a semiretired couple. "They came out of retirement and said, 'Hey, let's do a restaurant again!' And then they thought, 'What the hell were we thinking?' They were ready to get out," Ken says. "And we were ready to get in."

A decade earlier, Ken and Wendy had attended Appalachian State University, and they had hoped to remain in Boone after graduation. "That lasted a couple of months," Ken says. "And then we realized, 'You know what? We're going make $6 an hour.' So we went back to my hometown in High Point."

Ken took a job at Noble's Restaurant; he considers the nine years he spent working for chef/owner Jimmy Noble an apprenticeship. He rose to the position of Executive Chef. But the mountains were calling. Wendy went to Boone to visit a friend, and when she came home, Ken asked her how her trip went. "She started to cry! She said, 'I want to move back,'" Ken recalls. "It was a pretty easy call at that point."

The Gordons had been thinking for quite awhile about opening their own restaurant in Boone. But their vision didn't exactly line up with their reality. "We were going to find the perfect spot downtown," Ken says, "to open a vegetarian restaurant."

The Gamekeeper had -- and still has -- a reputation worthy of its name. Menu offerings include duck, bison, venison, elk and even emu; not exactly vegetarian diner fare. The landlord strongly suggested that they keep the name, but initially, Ken wasn't so sure that was a good idea. "I was concerned that it was going to scare people: 'I don't want to eat game. Do you have anything ordinary to eat?'" But in the end, Ken and Wendy decided to stick with the name. "And we thought, 'Well, if we're going to do that, let's make sure that about 50% of our entrees are game," Ken says. "And it ended up being a very, very smart thing. I appreciate that he talked us into that."

But Ken and Wendy brought much of their vegetarian-focused mindset to bear on the menu; that approach enlivened the offering in important ways. "I'm still going to braise some stuff and let it cook forever," Ken says, "but the whole vegetarian idea was, 'We'll find the best carrot, and we won't try to cover it up with anything. We'll cook it just right, and put it on the plate. And hopefully someone will say, 'This is the best carrot!' That's always been the goal."

The Gamekeeper's culinary perspective draws from traditions worldwide, subtly and harmoniously combined. "We appreciate the Appalachian culture and heritage. But there's a world of food out there," Ken says. "So we may take a little influence here and there." But mainly, it's the mountains that inform The Gamekeeper's menu.

"Bison used to run through here thousands of years ago," Ken points out. "So I feel good about putting that on the menu. And Native Americans identified and used so many plants, so it's nice that we have some foragers who are bringing those kinds of things to our back door."

That kitchen back door is the thing that most excites Ken Gordon's creativity. "When we first got into the restaurant, there was no local distributor," he explains. "So, to get great stuff we had to get in touch with local farmers. Eventually, more farmers started getting in touch with us." Today he also works closely with Caleb Crowell's New Appalachia distributor, a key player in the region's fresh food network. "Oh, look! Let's get some of that. We'll work with that," Ken says when he surveys his produce and meat options. "That's the inspiration." And the Gordons' inspired culinary vision is what keeps diners coming back, weather permitting.