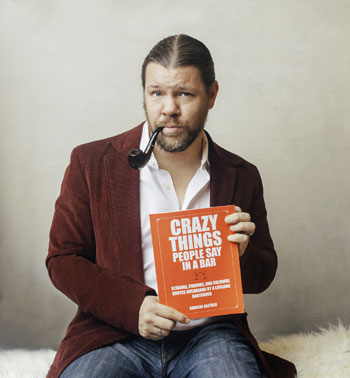 Sandlin Gaither has been listening to you and your friends. From his position behind the bar at popular local music venues in Asheville, N.C., he's been witness to some memorable conversations. Without causing a delay in the serving of beer, wine and mixed drinks to thirsty patrons, he's managed to take notes, preserving thousands of the most memorable, outrageous and simply bizarre things that he's heard. And he's compiled the best -- or, in some cases, worst -- ones in a pair of self-published books, Crazy Things People Say in a Bar and a similarly-titled second volume. To celebrate their release, Gaither presents a spoken-word-plus jazz performance to the Crow and Quill on February 4.

It's generally accepted that alcohol reduces drinkers' inhibitions. In some cases, it can also help make them act unhinged, outrageous and really stupid. And if there's an upside to all that, it lies in the fact that they can sometimes be outrageously quotable. Sandlin Gaither came to that realization back in 2014.

"I was frequently Facebook-posting 'Top Ten Things People Said' at whatever show," says the longtime Grey Eagle and Ambrose West bartender. "My goal was to eventually have 100 of those -- a thousand quotes -- and then to put them into a book." He reached that figure quickly.

"I started to think to myself, 'People in Asheville think this is pretty funny, but I feel like I might have something bigger here,'" Gaither says. So he eliminated quotes that were overly specific with regard to a place or performer. "And I was still left with a whole bunch of stuff."

Some of the things Gaither heard were said over and over by different people; those became running gags online. But what's funny on Facebook might not always land when it's on the printed page. No matter how many times people say it -- and evidently they say it a lot, even in Beer City USA -- Gaither believes "you can only include 'Why don't y'all have Bud Light?' one time in a book."

Many of the crazy quotes in Gaither's two books are decidedly NSFW, but even the comparatively tame ones will raise more than a few eyebrows. One of the most memorable is also a favorite of the author. He witnessed a male bar patron approaching a woman. "You're a pretty lady. I'd like to buy you a drink of tequila," the man began. "In fact, I'll buy you all the tequila you want until my wife gets here."

Some of the quotes Gaither collected are even more amusing when removed from their original context. Reader imagination fills in the blanks for this gem: "It seems that there's been a rather serious accident out front. Is there a shop vac we could use?"

Others are vivid enough that an indelible mental image presents itself. "C'mon, everybody! There's a chainsaw fight happening in the parking lot!" Gaither emphasizes that the quote -- like all of the vignettes in his books -- really, really happened. A switchblade fight escalated when one of the combatants retrieved a chainsaw from his truck. (No one was hurt, and all dispersed seconds before police arrived.)

Bar patrons provide an endless stream of bizarre quotes, and even after publishing two volumes, Gaither is still collecting them. New material presents itself almost daily. He mentions one quote overheard just a few days ago: "I've eaten enough of my dog's hair to last me for a while." And another: "Can I lay down on this bar and have you pour tequila all over me?" (The answer was no.)

Though he's a creative -- dozens of his evocative photo portraits grace the walls of the Grey Eagle -- Gaither is quick to admit that he's not a comedian. But that hasn't stopped him from enlisting a jazz combo led by Aaron Price to back him up as he reads selections -- likely including ones that can't be printed here -- at the Crow and Quill. "Some of them will get huge laughs," he predicts, acknowledging that others may not (and aren't intended to).

For performative inspiration, Gaither is drawing on the influence of an unlikely trio. "A little bit of William Shatner, some Tom Waits and a bit of Robert Goulet," he says with a smile. One thing's for sure: the quotes will all be crazy.

Back to Spoken Word Main Menu