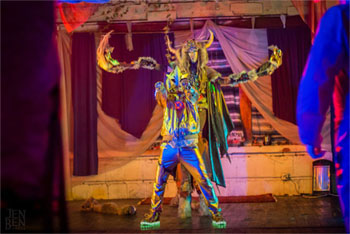 NOTE: Owing to the lingering global pandemic, the festival was postponed from its original date and transformed into an event leaning more heavily on the virtual. The slate of perfomrers changed as well. Written in early January 2022, the following story does not reflect those changes. For a significantly edited/updated version of the feature, please see the March 17 story in Mountain Xpress, published when I was traveling abroad. -- bk

Asheville is well known for its quirky character, and for its focus on music and the arts. So it stands to reason that as the Fringe festival phenomenon took off, the city would launch its own homegrown version. Now celebrating its 20th year, the 2021 Asheville Fringe Arts Festival takes place in multiple venues around town.

As Asheville-based poet, author, journalist and performance artist Alli Marshall explains, Fringe was originally created to fill a void. "Fringe Festival got its start in Edinburgh, Scotland," she says. "There was already an arts festival, but a number of artists weren't invited to perform. So they created their own alternative festival, on the 'fringes' of the big one."

Marshall notes that Fringe artists tend to be more experimental, addressing themes outside the mainstream. Theater productions dominate, but Fringe embraces "music, spoken word, dance and all sorts of genres," she says.

The original Fringe Festival premiered in 1947 and has endured for 75 years. And the concept caught on, spreading worldwide. More than 100 cities around the globe -- primarily North America, Europe and Australasia -- have and/or continue to mount Fringe Festivals of their own.

Asheville premiered its own Fringe Festival 20 years ago, launched by Susan and Giles Collard of Asheville Contemporary Dance Theatre. Jim Julien was another important key figure in the festival's start, and for many years thereafter. "When I first participated in the first Fringe festival at the BeBe Theater, I never anticipated all the magic and delight that Fringe still provides to this day," he says. Julien refers to the continuing success of the Asheville event as "the Fringe miracle."

Marshall first performed at Asheville Fringe Festival in 2017; her work, "The Top-Ten Superpowers of All Time" will premiere this year, and she's currently an AFAF board member. She emphasizes that Fringe is especially important to the local arts community. "As we see more and more of the incubators -- smaller theaters and affordable practice spaces -- go away, it becomes more and more difficult for [non-mainstream] artists to be able to stage their work." Fringe brings them together, leveraging the creative efforts.

Some Fringe festivals are free-form, with a list of performers decided by lottery. The Asheville event takes a more thoughtful approach. "It's juried," explains Marshall, noting that not every applicant is suited for inclusion. "Maybe they're not experienced enough, maybe they live too far away, or they don't realize what sort of budget it'll take." The Asheville Fringe Festival features experienced performers who know what they're getting into, and who can deliver.

Michelle Troszak is a founder of Skysail Theatre; their first production, Tithonia: A Lesbian Space Opera will be featured at this year's Fringe. Troszak says that with co-founders Lea Gilbert and Terran Wanderer, "we all came together with a love for storytelling, music and theatre, and a desire to tell interesting new stories in a queer space." Describing the work as "DIY lesbian media," Wanderer adds, "We looked for a lesbian space opera and we couldn't find one, so we had to make one!"

A veteran of several Asheville Fringes, Phillipe Andre Coquet will present his one-man musical drama comedy, Hi Ho, Hi Ho, It's Off to Work I Go. The work is described as Coquet "tell[ing] stories of his life on the stage, on the streets [and] in the bedroom, all while singing and dancing to songs from Broadway musicals about prostitutes." The artist describes his production as a work in progress. "Hi Ho is still being created, and probably will be until opening night," he admits. "I've been working on it for about 10 years, and it keeps shifting as I play and explore, and it reveals itself to me."

Asheville is at the top of an alphabetical listing of Fringe festivals. Thanks to its January date, the AFAF often attracts the attention of national artists who want to use Asheville as a proving ground to work out the kinks in their works before submitting them elsewhere. "We also have shows that have already won awards and been successful in other places," she says. Drawing from more than 100 applicants, this year's festival features 45 live (and/or live online) acts, more than two dozen of which are local artists.

Prior to the pandemic, the AFAF had grown each year. By necessity, the 2021 festival was a virtual event, but for its 20th anniversary, this year's festival will be a hybrid event, mixing in-person and virtual performances. The hybrid nature of this year's festival is borne of necessity, but it may point the way toward the festival's post-pandemic future. "One thing we realized last year is that there is an appetite for online content," Marshall says.

Challenges remain. Drawing audiences out of their homes in January can be difficult, and staging the three-day event in multiple locations present logistical hurdles. One of the festival's favored venues, the Sly Grog Lounge, is currently closed due to a recent fire. And Marshall candidly acknowledges the difficulty of putting such a sprawling, varied endeavor together year after year. "It's hard to keep any sort of artistic venture going for a long time," she says.

Yet the Asheville Fringe Arts Festival continues to thrive. And a big part of that is thanks to its quirky, offbeat, outside-the-box character. "It might be weird," says Marshall with a mischievous grin. "But it's all going to be of quality."