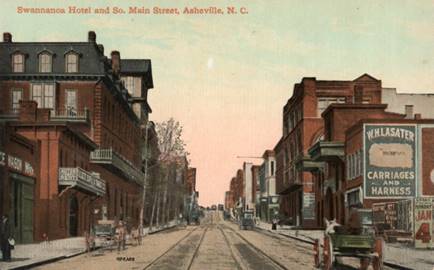 When the COVID-19 pandemic spread to the United States in the early months of 2020, isolation was one of its side effects. Like many people, Montreat resident Mary McPhail Standaert found herself cut off from much of the social interaction that had enriched her life. So with the help of husband Joe, the educator, author and historian launched a project to occupy her time. A year-plus later, the conceptually-linked pieces of that project have been compiled in a new self-published book, Buncombe County Name Game.

Combining digestible bits of economically-written history and trivia with vivid postcard images, Buncombe County Name Game documents the history of the Swannanoa Valley and its environs in a way that hasn't been attempted before.

Standaert started the project on March 19, 2021. Tracing the origin of the region's "Land of the Sky" sobriquet to an 1876 romance novel, she explained that the call letters of Asheville-based television station WLOS are a nod to the phrase. Standaert shared the compactly-written information with friends and family via email. The email was "just a way to keep people connected," she says.

The next day she sent another email exploring the name origin of the town of Oteen. Another email followed, then another. Each was numbered, and included a notation marking the number of days since social distancing had begun. With their routines upended, Standaert says that "people were saying that they couldn't keep track of time." The Name Game was becoming inextricably linked with the enforced spaces between people. And the project would share a characteristic with Standaert's expectations regarding the pandemic: "I didn't plan for it to be as long as it was," she says.

For her seventh email, Standaert decided to attach an image, a photo of toad shade trillium and bloodroot captured by her husband Joe. The reaction was positive. So along with the next day's email focusing on the origin of the names of Pack Square and Pack Library, she included a scan of a vintage color postcard. That one elicited even more positive responses from among the 200 or so people on Standaert's email list. "People like seeing vintage images," she says. So vintage postcard images became a recurring feature, accompanying the brief texts.

Beyond her academic credentials -- she's the author of two histories on the region, Montreat (2009) and Swannanoa Valley (2014) -- Standaert and her husband are uniquely qualified to tackle an expansive project like Buncombe County Name Game thanks to a shared hobby. "We have this rather incredible postcard collection,," she says. "We've been collecting for almost 40 years." And the project afforded a way to combine history with the vivid, colorful images.

Long before social media, postcards were the primary means of written communication. Standaert says that the heyday of postcards was the early 1900s, to about 1920. With a photograph on one side and space on the reverse for an address, a stamp and a short handwritten message, postcards combined communication with the sharing of something that had souvenir value.

Many of the photographs were shot in back-and-white. "Kodachrome [photo process] didn't come in until the 1930s," Standaert says. But many postcards dating from before then were hand-colored, giving people their only opportunity -- short of a visit -- to see what notable places looked like. And the couple's collection is massive, including about 800 different postcards depicting Montreat.

Today many of those places are gone, or substantially changed. And thanks to its tight focus on the Swannanoa Valley, Montreat, Black Mountain and Asheville, the Standaerts' postcard collection stands as a kind of time capsule, documenting the region during a time when horse-drawn carts -- and then trolley cars -- filled the roads.

Accomplished photographer Herbert Pelton documented much of the Swannanoa Valley on film in the early 1900s, and his images grace thousands of postcards. And the region was home to a major manufacturer, the Asheville Postcard Company. The region's enduring status as a tourist mecca meant that there was significant demand for postcards depicting life in and around the area.

Once Standaert started adding the photos to the emails, she made another decision: she would limit each message to 170 words. That's longer than a typical photo caption, but short enough to be digested quickly. And Standaert notes that her written texts weren't designed as captions, anyway. Instead, the words and images complement each other while standing on their own.

Eventually, Standaert's list of recipients grew. And those people were sharing the emails. So another decision was made: she started posting some of the mini-essays and scans of the postcard on Facebook, in the Asheville Politics group and on a Black Mountain page. "Those would reach a different group of people that I didn't have access to , or knowledge of," she says. "And then later on, I started posting them on my own Facebook site; that reached yet another group of people."

People and places were immortalized on color postcards, and Standaert's written pieces provided context. And by the time the email-and-posting endeavor concluded with entry #197 on March 20, 2021, the project had taken on a larger character. Working with husband Joe -- his duties included the high-resolution image scanning -- Standaert compiled all of the content into a bound and printed volume, Buncombe County Name Game: A COVID-19 Pandemic Project.

That last entry struck a personal note. "Midway through the year," Standaert wrote, "a friend asked, 'Did you know [this project] was going to become a career?' I did not, but the joy has been in the sharing and connecting." Standaert's book approaches the Land of Sky's history from a fun, fascinating and though-provoking perspective. There's nothing else quite like it, and its author is aware of that fact. "I would like for everybody who's in Western North Carolina and who likes history to read it," Standaert says.